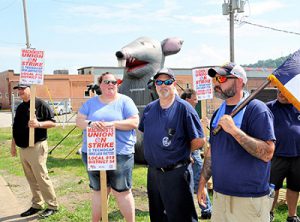 Striking IAM Local 818 members were joined on the picket line yesterday by dozens of other union members and supporters to show solidarity with the workers in the eighth week of their strike at Tecnocap. The skilled trade workers voted unanimously to strike the Glen Dale, WV manufacturer after rejecting the company’s offer in April.

“Our members deserve better, and they’ve earned it,” said District 54 President and Directing Business Representative T. Dean Wright. “The continued disrespect Tecnocap has demonstrated towards these workers is unacceptable. Until Tecnocap is prepared to enter into lawful bargaining for a fair contract that reflects the skills and the years of dedication to this company, we’ll continue to be on this picket line.”

“It was an honor to stand shoulder to shoulder with these brothers and sisters on their picket line,” said IAM Eastern Territory General Vice President Jimmy Conigliaro Sr. “They’ve stood strong for two long months now as the seasons changed from winter to the heat of summer, yet they aren’t deterred. Their strength and solidarity is impressive, and it was truly a remarkable moment for me to stand with them.”