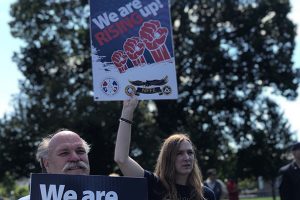 IAM International President Robert Martinez, Jr., is urging members of the U.S. Senate to sign on to a letter led by U.S. Sen. Gary Peters (D-MI) aimed at undoing some of the damage done by President Trump’s executive orders attacking the rights of federal workers.

Peters led 43 of his colleagues in a letter requesting that Senate leadership and appropriations conferees include provisions to protect federal employees’ collective bargaining rights in any appropriations legislation Congress passes.

“The current administration has attacked federal workers’ collective bargaining rights with these imperious executive orders,” said Martinez. “These government employees have been condemned for expressing their voice on the job and have suffered through a nasty shutdown that left many of them financially stressed.”

“Furthermore, as the country’s largest unionized employer, the federal government sets the tone for labor-management relations across the country,” said Peters. “At a time when the right to unionize in both the public and private sector is increasingly under attack, we must affirm our support for worker and labor rights.”