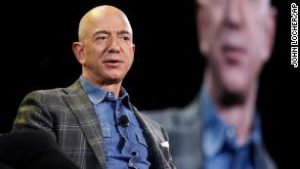 FILE – In this June 6, 2019, file photo Amazon CEO Jeff Bezos speaks at the the Amazon re:MARS convention in Las Vegas. Washington state’s richest residents, including Bezos and Bill Gates, would pay a wealth tax on certain financial assets worth more than $1 billion under a proposed bill whose sponsor says she is seeking a fair and equitable tax code. Under the bill, starting Jan. 1, 2022, for taxes due in 2023, a 1% tax would be levied on “extraordinary” assets ranging from cash, publicly traded options, futures contracts, and stocks and bonds. (AP Photo/John Locher, File)

Thousands of Amazon warehouse workers at an Alabama facilityĀ will be able to cast their votes on whether to unionize by mail-in ballots beginning next week after theĀ National Labor Relations Board rejected the company’s latest attempt to stall the vote by pushing for it to be held in-person, despite the pandemic.

In aĀ decisionĀ posted Friday, the NLRB denied Amazon’s motion filed in late January to review its earlier decision to hold the milestone vote for workers by mail. The NLRB said Amazon’s request “raises no substantial issues warranting review.”
Ā
Ballots are set to be mailed out Monday, February 8, and eligible workers at the Bessemer, Alabama facility will be able to vote over the course of nearly two months instead of through an in-person event, which may take place over one or several days.
Ā
“Once again Amazon workers have won another fight in their effort to win a union voice. Amazon’s blatant disregard for the health and safety of its own workforce was demonstrated yet again by its insistence for an in-person election in the middle of the pandemic,” said Stuart Appelbaum, president of theĀ Retail, Wholesale and Department Store Union (RWDSU), which is conducting the union drive, in a statement. “Today’s decision proves that it’s long past time that Amazon start respecting its own employees; and allow them to cast their votes without intimidation and interference.”
Ā
The union vote is a landmark moment for the Alabama facility andĀ AmazonĀ (AMZN). While some Amazon workers are unionized in Europe, the company has so far fended off unions in the United States. A union election was held in 2014 at a Delaware warehouse, but resulted in workersĀ largely rejectingĀ the effort.
Ā
“Our goal is for as many of our employees as possible to vote and we’re disappointed by the decision by the NLRB not to provide the most fair and effective format to achieve maximum employee participation,” said Amazon spokesperson Maria Boschetti in a statement to CNN Business Friday. “We will continue to insist on measures for a fair election that allows for a majority of our employee voices to be heard.”
Ā
The NLRB’s earlier decision determined that approximately 6,000 employees at the Bessemer facility would cast their votes by mail, noting the health risks from the pandemic.
Ā
“A mail ballot election will enfranchise employees who cannot enter the voting location for health reasons or due to positive COVID tests,” the NLRB decision stated. “In addition, a mail ballot election will protect the health and safety of voters, Agency personnel, the parties’ representatives, and the public during the current health crisis.”
Ā
AmazonĀ had pushed backĀ on the NLRB decision, stating it didn’t specify what is considered an “outbreak,” as well as citing that a mail election could “disenfranchise dozens or hundreds of voters” because it is imperfect. It cited that “mail ballots may be ā€” and frequently are ā€” lost or delayed, causing a prolonged election process.”
Ā
In a statement to CNN Business at the time, Amazon spokesperson Heather Knox said the company believes “the best approach to a valid, fair and successful election is one that is conducted manually, in-person, making it easy for associates to verify and cast their vote in close proximity to their workplace.”
Ā
“Amazon provided the NLRB with a safe, confidential and convenient proposal for associates to vote onsite which is in the best interest of all parties — associate convenience, vote fidelity, and timeliness of vote count,” Knox said in the statement. “ā€ÆWe will continue to insist on measures for a fair election, and we want everyone to vote, so our focus is ensuring that’s possible.”
Ā
The union push comes as Amazon’s warehouse working conditions have come under heightened scrutiny during the pandemic. The company has hired hundreds of thousands workers globally to support a surge in demand. A number of warehouse workers haveĀ spoken outĀ about safety concerns since the start of the pandemic.
Ā
Workers at the Bessemer facility first filed a notice in November with the NLRB about holdingĀ an electionĀ to unionize withĀ RWDSU.
Ā
“Having a union at Amazon would give us the right to collectively bargain over our working conditions including items such as safety standards, training, breaks, pay, benefits, and other important issues that would make our workplace better,” reads a website in support of unionizingĀ Amazon’s Bessemer workers.
Ā
Read the original article here.
← Previous Post