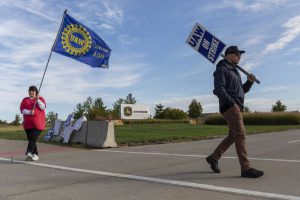 A tentative deal struck betweenÂ Deere & Co.Â and the United Auto Workers union offers substantial improvements over one that workers rejected before going on strike, including larger wage increases, no new tiers to retirement benefits and a signing bonus of $8,500.

The deal, which is subject to approval by union membership, suggests that John Deere backed down rather than get drawn into a protracted work stoppage with farm equipment demand at the strongest in a decade and earnings at a record.

The contract includes wage hikes of 10% in the first year of the contract and 5% in the third and fifth years, according to a publishedÂ documentÂ of the deal on the union website Sunday. No one was available at John Deere to comment on the latest accord.

Details of the agreement come more than two weeks after some 10,000 John Deere employees went on strike for the first time since 1986, havingÂ rejectedÂ a prior deal that called for a 5% to 6% wage increase for the first year. Shares of Deere rose each of the last two weeks, indicating shareholders continued to expect a speedy resolution to the strike.

â€śThe workersâ€™ rejection of the initial deal combined with the enormous gains made between the first and second deals, and the very real improvements that the contract will bring, all of it points to the significant consolidation and exercise of worker power,â€ť said Benjamin Sachs, a labor law professor at Harvard University.Â

The Deere agreement adds to evidence that U.S. workers are successfully pushing for higher compensation as the U.S. economy emerges from its pandemic-blighted slump. Businesses are increasingly on the back foot when it comes to wage negotiation because theyâ€™re struggling to hire workers and retain enough people to cope with swelling demand.

â€śWeâ€™re living in a kind of extraordinary moment of worker mobilization and militancy,â€ť Sachs said. â€śAt this particular moment in history, when workers are willing to fight theyâ€™re going to win.â€ť